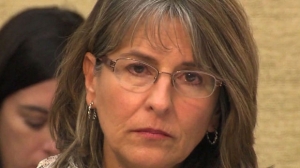 Councilwoman Lorie Zapf is under fire for racially-charged comments made by her staffer, Shirley Owen.

The Holidays are almost over, but our friends at Point Loma Democratic Club have highlighted an online petition asking District 2 Councilwoman Lorie Zapf to fire her staffer, Shirley Owen, for racially-charged comments made earlier this month at our city’s inauguration ceremony for newly elected and re-elected members of the San Diego City Council.

From the petition: “On December 10, 2014, a group of protesters, including children, held a silent demonstration at the San Diego City Council Inauguration. The protest was against police brutality and to declare that black lives matter. The protest did not cause any disruption to the ceremony because it was held silently.  After the ceremony was complete 4 of 9 City Councils member commended the group of protestors on how respectful they were of the inauguration ceremony.”

As reported in a KPBS article, Zapf’s community staff member for Clairemont and Bay Park was quoted in reference to the protestors as saying, “f—— idiots with their hands up” and “I wanted to shoot them.”

If you’d like to join in signing, please check out the petition at Change.org.