As a friendly reminder, our monthly Clairemont Democratic Club meeting is tonight — 7:00pm at Boomerangs (4577 Clairemont Drive, San Diego, CA 92117). Our guest speaker will be attorney and Democratic activist Gil Cabrera. Mr. Cabrera will be speaking on How Democrats Can Win in San Diego.

Also, a presentation on last November’s elections and how organizing contributed to a big win for Scott Peters by our club’s IT Chair Ryan Trabuco and our county party’s Deputy Vice-Chair Will Rodriguez-Kennedy.

If you’re a registered Democrat, you may participate in the 2015 Assembly District Election Meetings (ADEMs) that are being held in many State Assembly Districts throughout California. These meetings are where you elect those delegates — 7 women, and 7 men — to represent us at the upcoming 2015 State Democratic Convention in Anaheim.

For more thorough information, please check out the video below from the California Democratic Party.

Since Clairemont is located in both the 77th and 78th Assembly Districts, both ADEM Elections are being held tomorrow (Saturday), January 10.

For those club members and fellow Democrats who live in the 78th State Assembly District (represented by our Assembly Speaker Toni Atkins), there are four (4) of our club members running and they would appreciate your vote! Club members include: Curtis and Martha Page, Susan Guinn, and Rhoda Quate.

Some candidates are running on slates, some are not. You do not have to vote for a slate. You can vote for whomever you wish, but we hope you will include these four club members if you vote in AD 78. For more AD 78 candidates and statements, please check out the CA Democratic Party’s website here.

Here is the meeting location and information for the 78th Assembly District elections:

For those club members and fellow Democrats who live in the 77th State Assembly District, there is only one slate being put forward by a host of different Democratic clubs, and it has also been endorsed by club members Carol Kim and Ryan Trabuco. For more AD 77 candidates and statements, please check out the CA Democratic Party’s website here.

As a reminder, you do not have to vote for a slate. You can vote for whomever you wish. Below is the meeting location and information for the 77th Assembly District elections: 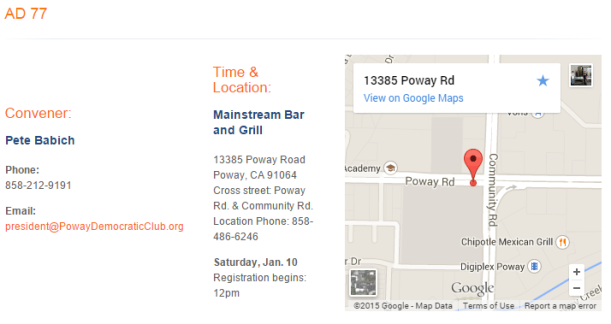 Councilwoman Lorie Zapf is under fire for racially-charged comments made by her staffer, Shirley Owen.

The Holidays are almost over, but our friends at Point Loma Democratic Club have highlighted an online petition asking District 2 Councilwoman Lorie Zapf to fire her staffer, Shirley Owen, for racially-charged comments made earlier this month at our city’s inauguration ceremony for newly elected and re-elected members of the San Diego City Council.

From the petition: “On December 10, 2014, a group of protesters, including children, held a silent demonstration at the San Diego City Council Inauguration. The protest was against police brutality and to declare that black lives matter. The protest did not cause any disruption to the ceremony because it was held silently.  After the ceremony was complete 4 of 9 City Councils member commended the group of protestors on how respectful they were of the inauguration ceremony.”

As reported in a KPBS article, Zapf’s community staff member for Clairemont and Bay Park was quoted in reference to the protestors as saying, “f—— idiots with their hands up” and “I wanted to shoot them.”

If you’d like to join in signing, please check out the petition at Change.org.

DeMaio was held to no more than 52% of the vote in his best-performing precinct, only winning five — two of those five by a small plurality. Meanwhile, Scott Peters won four Clairemont precincts with over 60% of the vote, and won everything else!

For a more detailed look at the updated results, please visit the inewsource website here.

Below is video from ABC 10News. 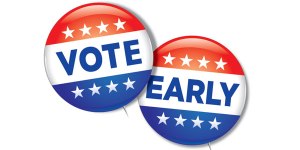 Ballots are out. Early voting has already started. Voters are casting their ballots now!

If you would like to vote early, and are not already a permanent absentee/vote-by-mail voter, you can take a short trip to the Registrar of Voters office in Kearny Mesa and cast your ballot! The Registrar’s office is located at 5600 Overland Ave., San Diego, CA 92123. They are open Monday thru Friday 8:00am-5:00pm.

The two most important elections that are happening in our Clairemont community are for our 52nd Congressional District, and our 6th City Council District.

What about those other endorsements? We’ve got you covered!

From the San Diego County Democratic Party’s Endorsements page, please refer to the list below:
(* = incumbent)

At this month’s Clairemont Town Council meeting, their Board members celebrated the 60th anniversary of the Town Council’s founding.

Several of our Clairemont Democratic Club members are also members of the Town Council, and attend their monthly meetings regularly to keep updated on issues in our community. Three of our club members also serve on the Town Council Board of Directors.

Our Democratic Congressman Scott Peters and our endorsed candidate for San Diego City Council (and club member) Carol Kim joined board members in the photo.

Congrats to the Clairemont Town Council for 60 years of community service! Here’s to another 60!

Our October meeting will feature the speaker Carolyn Senger MD.   Dr. Senger is a physician at UCSD Medical Center who is an expert on the details of the Affordable Care Act.  She will be speaking about some of the benefits of the ACA which are not commonly known.   Come and learn the advantages of this new healthcare law.

Dr. Carolyn Senger is a cancer researcher and preventive medicine physician at UCSD. She received her undergraduate education from the University of Michigan and her medical degree from Johns Hopkins. She joined Doctors for America’s “Patients over Politics” Bus Tour and soon afterward accepted the California State Director position. As state director, she coordinates local and state efforts of over 2300 members. Caring for patients with preventable health conditions and calamities fuels her passion for health advocacy and policy. She is inspired every day by the amazing members of the health care community (including patients) who strive to improve our health care system and envision a day when affordable, fair, high quality health care is accessible to everyone.

This week San Diego Democrats mourn the passing of Gloria Johnson (1937-2013), who was known for four decades as one of California’s most forceful activists for feminist and lesbian issues and Democratic politics.

In 1978 Gloria served as the San Diego Co-Chair of the committee to defeat the Briggs Initiative (Proposition 6), which would have banned gays and lesbians from teaching in California public schools.

Gloria was a longtime member of the National Organization for Women (NOW) and served as Co-President of the San Diego County Chapter and Vice President for Political Action for California NOW. Before her retirement in…